Disclaimer: This game is a demake of Vampire: The Masquerade Bloodlines. The events depicted in this game took place in Santa Monica in 1997. At the request of the copyright owners, the names have been changed. Out of respect for the undead, the rest has been told exactly as it occurred

Bloodlust: Santa Monica is a demake of Vampire: The Masquerade: Bloodlines in the form of a 2D graphic adventure with retro pixelart. The game features a mix of classic LucasArts SCUMM graphic adventure games like Monkey Island, Day Of The Tentacle or Thimbleweed Park and story-intensive RPGs like Fallout. Thematically, the world of Bloodlust: Santa Monica is set in a dark alternate Santa Monica where humanity unknowingly coexists with vampires. The player is a vampire who has been sent to Santa Monica as a punishment for her fathers’ sins and is forced to complete a series of quests to gain the favour of Sebastien De la Croix, the vampire who rules Los Angeles.

INSTRUCTIONS FOR PLAYING THE GAME
Point and click to move your character.
Right mouse click to look at items.
Press Q to show the quest log.
Hold TAB to show all items in the room.
Press ESC to access the main menu and save your progress.

how do you find thung? im assuming he's in the sewer but theres no way to get down there.

Mmmm I don't want to spoil the puzzles and quests here but just as a little hint: finding Bernard Thung is one of the last quests of the game. Just as in the original Bloodlines it's not easy to get to that sneaky Nosferatu, you have to work your way through a lot of quests first. Enjoy!

also sorry to keep bothering you, but how do i get rid of previous saved games in the slots, since they just start at the beginning anyway

Mmm you're right, there's no way to erase a saved game but you can overwrite it if you want. Try pressing ESC during the game and then saving the game in another saved game. It's not the best save system of the world so I'll rework it from scratch for the sequel and maybe add an auto-save feature too. Sorry for the inconvenience!

wait what do u mean by saving it in another saved game?

There's 3 slots to save your progress. You can save multiple times in these 3 slots. Just press the Escape key during gameplay, then click Save Game and click any of the three available save slots. If you're having trouble saving your progress I strongly recommend downloading the desktop version, which saves a screenshot of each saved game so it's easier to keep track of your progress.

gotcha! sorry i didn't realize you could save it that way my bad

thanks for fixing the bail bonds glitch!

Hey, no problem at all! I'm glad you're enjoying the game now without the bailbonds bug. Cheers!

Awesome game! I'm currently a bit stuck, I cannot figure out how to steal the coin jar from the dinner without using the character that has the stealing skill.

Also, just some feedback, I have encountered a few bugs while playing:

- If you change the walking speed to the maximum the character often gets suck somewhere. Sometimes I need to reload the game to continue.

- Some times items get duplicated. For example, after mixing the rat poison with the steak I got two steaks. This also happened with the cake.

Thanks, awesome game nonetheless. I love the gameplay and having that many different charactes with different traits, makes me want it to play again with each character.

Also, another bug that happened only when playing through the web browser, when I got to the bounty hire place, I couldn't exit, the exit wasn't clickeable. I think that this is a reproducible bug on web, you just have to get there and that's it. It doesn't happen if you play from your computer.

Thanks a lot for the feedback and the bug reports! I'm currently working on the sequel to Bloodlust so probably it will take me some time to go back and fix the bugs from the first game. I will eventually fix them and maybe release a revised edition. Cheers!

how do you get out of the bounty hunter place??  my progress wont save for some reason and ive already worked so hard that i cant lose my progress. help!

Oh my! Is the saving system broken too? I'm really sorry, I'll try to fix it ASAP.

yeah when i click save game in the beginning it just takes me to the start of the game and all of the items/tasks i have are lost.  i ended up quitting the game since i couldnt get out of the bail bonds place but if you fix the saving id go back and do it all over again bc i really like the game!

are we supposed to save it from within the game? bc as far as i can tell theres no button to do that.  i clicked save game at the beginning, but it didn't save anything.

can't wait for this to come out! Will play this for sure!

Thanks! Today is the day. I'm releasing the first playable demo. Hope you like it!

sooo excited. thank you for doing this

Thanks a lot for support, Harold!

That looks awesome! I will definitely like to play it when it's ready.

We eventually want to do something artistically similar with dialogues in our game.

Thanks! The first playable version  is coming real soon :D
Dialogues are at the heart of great RPGs and adventures so they will be a perfect match for Rodent Warriors. Also, they're relatively easy to implement with third party plugins such as ink or vine. Cheers! 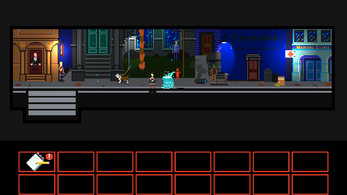 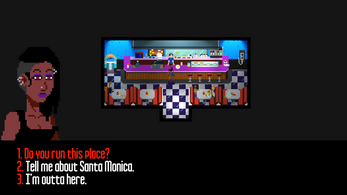 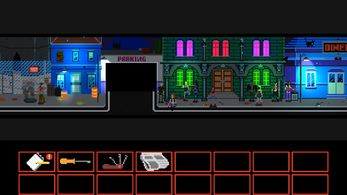